You Tube to the rescue!

I was sent these You Tube links:

Thanks to Gunzel we now know more about the loading ramps, and even a plan for one of them... reading between the lines it looks like they were about the same, the first built in 1958 the second in 1971. When work eases up a bit maybe I can build them... anyway here is the info, rather than searching for the comment, again a big thank you!

"
In 1931 a high loading platform was built on the up end yard neck by Cameron and Ramsay (the western one as shown on your diagram), it was then removed in 1934. In 1936 Tuck and Ramsay erected a platform on the same site. In 1943 a second platform was erected by the White Rock Lime Coy. Pty. Ltd., later Industrial Lime Pty. Ltd. on the up side of the existing one. In September 1953 this platform was taken over by APM.(1)

Due to congestion in the yard due to large increases in timber and sleeper traffic the back road to the rear of the goods shed was built and this required the cutting back of the existing two platforms in order to maintain clearance. A new high loading ramp was proposed at this time but it was resolved to trial operations with the new siding only at first.(2)

The trial proved unsuccessful as far as APM was concerned. Therefore a new high loading platform was built towards the down end of the new back road siding for the use of APM and they surrendered their interest in the platform at the neck of the yard. The new platform was completed in1958. The former APM ramp was then available for use by all consignors.(3)

Due to high ongoing traffic and the decay of the wooden ramps at the neck of the yard a second high loading platform and accompanying siding was built branching off the back track in an up direction in 1971.(4)

Have added some more pictures to the construction page, here is one :) 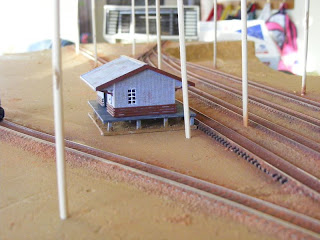 This picture shows the completed ballast, using Simply Glues "Simply Road Base - Clay" with an airbrush of Tamiya Dark Sand. The goods shed is a Spirit Design one on a scratchbuilt platform.

The area around the goods shed, and indeed a lot of the yard area needs to now be bought up to rail height using "Pollyfilla" mixed with tile grout for colour and texture. More to follow when I have time.
Posted by Rob at 5:36 AM No comments:

While I intend to go back and document what has happened, here are the latest construction photos. I've had the last few days off so have been getting a bit done.

This shows the layout complete, with the basic earth colouring done (using Oche coloured grout mixed into the Pollyfilla), the side valance fitted and painted to match Colourbond "Wilderness". A modified Spirit Design goods shed sits on the scratch built platform. 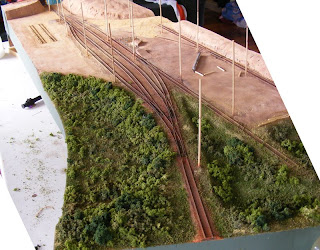 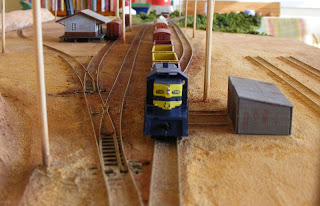 A train on the layout, first look at a scene to match these photos... 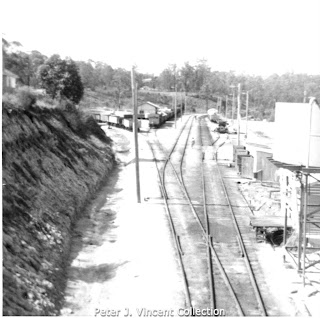 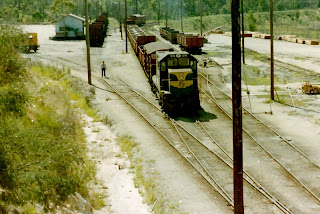 Will aim to get the angles better next time... better finish the etches for the Series 3 T class as well...
Posted by Rob at 7:23 PM No comments: