What I remember most from my railway inspired youth was the Series 3 T's in Bairnsdale yard. Occasionally (once a week or so) the schoolbus, for reasons unkown, would drive from Paynesville, into Bairnsdale and would drive own the road past the station. I remember seeing the first VLINE T3 as well (this route is now largely blocked from view).

Below are the samples of our next ready to run product, the Series 3 T. I drew the bulk of the artwork in hospital in Jan/Feb 2010, and Peter Boorman finished the artwork off, arranged the etchings and assembled the master. These samples and the master should depart for China on 22 Feb 2011.

A number of these locos are needed on Nowa Nowa! 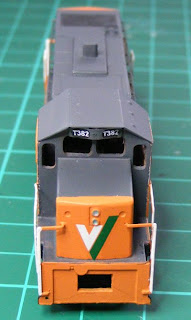 In my continuing effort to attempt to build a highly detailed layout without doing all of the work :) the construction of Boggy Creek Bridge was contracted out to Darren French... he has not disapointed!

The following are some in progress shots... now to convince him to do the rest of the scenery....

Now is there anyone out there who wants to build me a hundred trees or so?

Well I've been busy back at work the last few weeks and modelling has been quiet limitied, bits here and there... which are now coming together...

First is a sample of my next ready to run locomotive, the Series 3 T class. It will be cast and painted in China over the next few months and will be sold with a Kato NW2 mechanism. First though I have to paint samples and do the artwork for the printers, hence this sample. They colours aren't exactly right, it is more to get the overall feel and placement of artwork.

The model is cast in polyurethane, with brass roof and window surrounds, and I'm asking for wire hand rails to be fitted on the production versions. A VLINE version is also planned.

In addition I've had some orders for P class locos, shown below is a Freight Australia one. The model was assembled by Paul Welshe, painted by me (using a Tamiya spray pack) and decaled by John Smith (a recent convert to trains and N scale). John comes around most Thursdays for a modelling night, his wife and mine bead on another night... a real win win ! 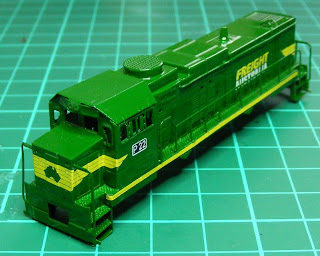 Gotta go now, hopefully will get a bit of modelling done over the weekend, 'aveagoodweekend!
Posted by Rob at 11:42 PM No comments: