Long time, no posts. The main reason is the new shed, most of my spare time has been used “helping” my father (who ended up doing most of the work, thanks Dad!) put up the interior walls and lining the shed. It isn’t fully complete, and won’t be for some time, but the business part is now done... and there is room to set up Nowa Nowa!
My other problem has been modellers block. Nowa Nowa is starting to near the end game... the easy bits are done, only the finishing touches to go... Except for one major item, the Water Tank/s!
Originally there were two 10,000 gallon water tanks at Nowa Nowa,  one was removed in the late 1970’s while the other remained. I’ve been trying to get plans for this type of tank (fairly common VR style) and have largely failed. There is one here at Seymour and I’ve used some measurements from that, plus estimates to build the following model.
I have been procrastinating on this for a while, I really need to etch the furnishings and I was going to etch the stand... I also need to do the tank which is about 15ft across... to many things so I focussed and started eating the elephant last night by building the tank stand from styrene strip!
First I draw the plan in Corel Draw, then I superglued the strip to the plan which looks like this: 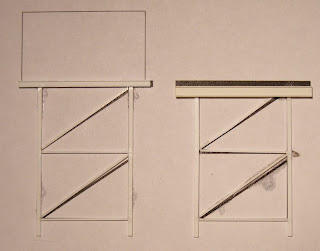 I let that dry for a couple of hours then removed the backing paper and assembled the four parts so now it looks like this: 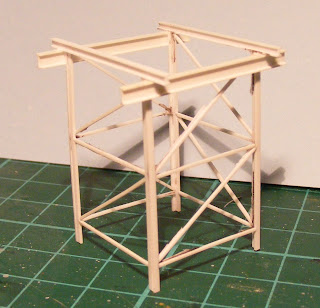 I’m pretty happy with it, a couple of areas need to have some superglued removed.
And now another things I’ve been procrastinating on, updating the blog, is done!
Posted by Rob at 2:08 PM