Today I received some prints in the new shapeways Frosted extreme detail. At 16 microns it is about twice the resolution of the Frosted Ultra Detail at 29 microns.

You can see a difference in the print quality. The following have had no surface finishing, just painted grey to help photograph.

First the plateframe bogie, this is the best and worst print that I received,both are crisper than the FUD, showing the rivet detail much better.

The QR is also much crisper with far less surface roughness. There does appear to be one disadvantage though, the material is bowing in much more than the FUD, meaning casting these will be important 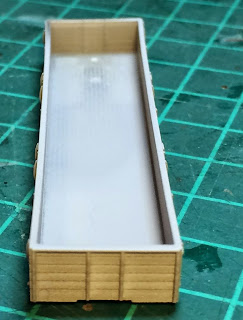 The QR end, showing the slight bow along the top of the sides.

The QN also shows a marked improvement in surface finish.


Overall a marked improvement on what was already "good enough" direct from the manufacturer. However the bowing is already a concern, indicating that these are great for making masters for casting, rather than finishing and placing on the track as is.