One of the most requested models in N scale is the VR Y class. An excellent etch has been available for a few years from N Scale Australia, but unfortunately there was no suitable mechanism. A few enterprising people have kitbashed/rebuilt mechs to work, most notable Paul Blake, usually using the LifeLike SW9/1200 mech.

Then the other day Chris Pearce from Spirit Design sent me the following pictures, using the concept that Paul Blake developed but laser cutting into plywood... 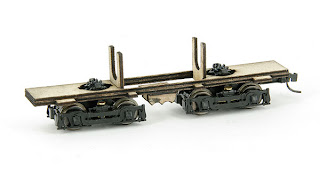 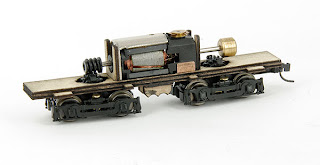 Chris sent me some pre-production samples to play with.

The first one I built as per his design above which features two layers of plywood and the plywood brackets and quickly had it running. The motor requires the worms to be moved/removed and the flywheel needs to be removed then added on again (a NWSL puller is essential for this). Hard wiring the bogie's to the motor improves running, and a decoder can easily be fitted (will do that next). Fitting a Y class etch to the mech was very simple as it rests on the plywood top and the side skirts hide the plywood. It looked great running, but I felt the mech was a bit high (a common problem with N scale).

So next I modified the design so that the second layer of plywood was cut down so that it fitted inside the body, while the body rested on the lower layer. This dropped the body by about 1mm. I also cut the ends so that you didn't have to keep removing the couplers when you pulled the mech out. This photo shows my two mechs. 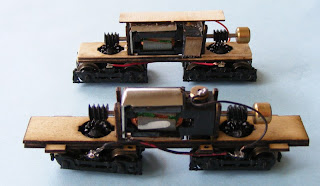 Here is a closeup of the modified mech I have highlighted in red where I cut away the second layer so it fits inside the body. The timer on top of the motor pushes the motor down so the worms engage the gear towers properly, otherwise the motor tends to lift and you loose power.

Here it is fitted to an undercoated body.

It works really well! You get to see through the grills as well. It happily pulls a small train, I plan to add more weight though, there is room in the hood and the cab.

While aimed at fitting DCC into the Lifelike SW9 it is interesting the use of an Atlas slow speed motor, NWSL wheels and Kato brass worms. This would be good if you can find old LL mechs, all you would need then is the bogies...
http://www.tonystrains.com/tonystips/2007/010707.htm
Cheers
Rob
Posted by Rob at 3:10 AM