In between looking after kids on school holidays, catching up on chores, working in the garden and doing orders  I've been working on one of my other modelling obsessions... T-TRAK!

I love T-TRAK for its simplicity and easy of use for getting new people into N scale, the fantastic KATO track, its extreme modularity and the camaraderie that has grown up around it in Australia where we have a very active group.

I have "pushed" the T-TRAK limits a number of times now, making wider, longer and more "prototypical" style modules. And now I think we (for again Phil and Ashley have helped out) have built the ultimate module... until the next one!

Being a country lad I have always been intrigued by the busyness, intensity of train operations, and all the detail of the city. This suits T-TRAK really well! I have been going through suburban track diagrams for a few months getting a feel for the network at various stages of development

Paul at “The Buffer Stop” in Melbourne often has his version at shows... then a thought hit me, this concept is similar to how “Victoria Park” just north of Collingwood in Melbourne was... and I could probably do it on T-TRACK. 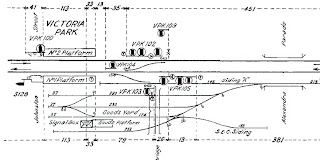 and I downloaded Anyrail (http://www.anyrail.com/index_en.html) and made the following plan:

I needed to fit within a 5 module area and I wanted to maximise the “Gumstumping” effect so added an extra switch back under the main running lines.


I then built and tested it over a period of several weeks to arrive at this final design.

Now to start on the scenery!

I will have it at the Wagga Wagga show in November.
Posted by Rob at 2:09 AM