Over the last three days I've been tackling one of the most challenging structures on Nowa Nowa, the road over rail bridge at the west end of the yard.

Originally it was a two trestle wooden structure. Sometime in the period 1978-1986 it was rebuilt into a concrete structure. 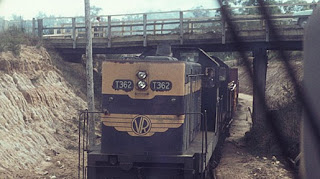 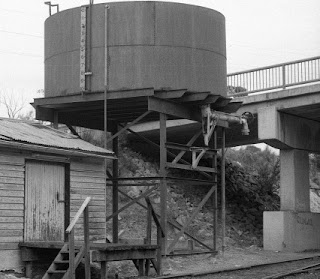 (shots of the concrete bridge are also scare, most people shot from it down into the yard)
I have been thinking long and hard about which version to do. I prefer to model the 1984-1990 period with VR and VLINE... but I couldn't be sure exactly when the bridge was demolished (with possibly the departmental residences demolished in about the same time...). In the end I decided I liked wooden trestles too much :)

With such little photographic evidence it was hard to do the bridge... so I trawled through Mark Bau's excellent site http://www.victorianrailways.net/ in the infrastructure section and came across this plan:

I figured that I could adapt it so I drew it out in Corel Draw to scale, and found that the "Piers over 13' and under 21" was spot on!

Here is a JPG of the corel output.

Using the plan I grabbed some Bamboo meat skewers and craft matchsticks and set to work. First I superglued the skewers down. 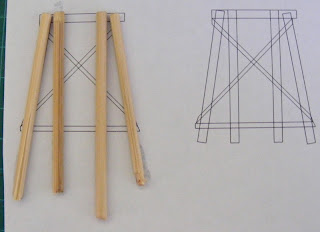 I used a razor saw to notch the two horizontals (I didn't do the diagonals as pictures of other bridges indicated they weren't cut in much, if at all) and glued (using white glue) the match sticks in. 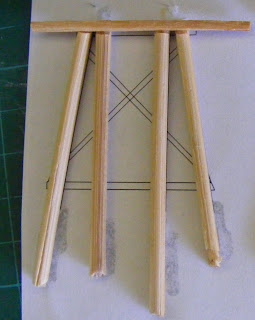 I lightly cut in the diagonals with a sharp knife and glued them in. 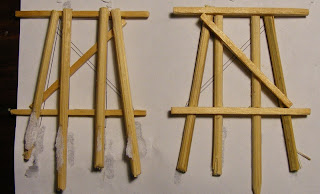 As you can see I've flipped the one on the left to do the other side.

Here is the final product test fitted to the layout 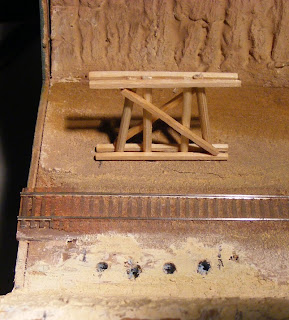