As posted in the Australian Free-moN groups.

Background
“Nowa Nowa” has been a long term ‘dream” of mine to build in N scale. After my major operations last year I had a little bit of time to recover, and decided to give it a go. Originally planned to be a “shunting layout” as a break from my T-TRAK “roundy roundy” during discussions with Phil Hillebrand he convinced me to go the Free-moN rout. I was aware of Freemo-N, in particular in European practice, so it didn’t take a lot of convincing!
However an early departure was made from the “Australian Draft” standard in that Peco Code 55 track was used internally, with 100mm of ME code 55 at each “interface” as per the spec. The key reason was that the Peco Code 55 exactly matched the sleeper spacing  for Victoria (if not the sleeper length) which would ensure it “looked right”. A secondary consideration was the availability of compound (“slip”) points, not required for Nowa Nowa but required for most other VR stations... and we had plans for future growth.
We accepted that there would be some loss of “running reliability” compared to the modern US code 55 products, but having built about four-five layouts with Peco I was comfortable we could handle it. I wanted the look right and reasonable running, vs great running but looking “wrong”.
Hobsons bay Setup
We set up the “minimum” size layout for Hobsons bay consisting of the “Nowa Nowa” module (which is about 80% to scale), the Boggy Creek module (also almost to scale, with Darren French making an AWESOME representation of the bridge, again thanks!) and the two “traverse” fiddle yards. Points were powered by DCC Concepts “Cobolt” point motors, thrown via DCC command (we didn’t get the control panel built in time), using a Lenz DCC system of command station, two boosters and three throttles (one throttle largely dedicated to throwing points).
The modules were setup on our T-Trak portable tables, chocked up a bit on blocks of wood.
Motive power was two series 3 T class, a series 2 T class (all using Kato NW2 mechs with TCS decoders) and a B class (with an Atlas SD7 mech and TCS decoder). Rollingstock was largely Aust-N-Rail RTR models (GY, B, U, ELX), Aust-N-Rail and Spirit design kits (including a W set and an E set of pass cars built by Paul Blake and myself).
In addition to the layout a few colour photos from various sources was used to show how close (or not) we were to the “real thing”.
Observations
Overall the layout was very well received, and demonstrated Australian N scale trains running smoothly, slowly and shunting in a realistic Australian setting.
Comments from people who had seen the real Nowa Nowa station before it was pulled up was that we had “nailed it”.
Some people felt that a skyboard would have enhanced the model.
Sustains
1.       Use of Peco code 55 Track. While we did have a couple of derailments (largely caused by rollingstock with “Romford” wheels, which were then replaced) the looc of the track was great. In addition when put against the ME Code55 track we noticed the ME track appeared “coarser”. Upon taking measurements we found that the rail head width of the ME track is approximately 25% wider. Recommendation. Tthat the Australian N scale standard is changed to Peco Code 55 when representing Australian locations.
2.      The “transfer” fiddle yards. While more work than I originally expected, and requiring the use of “stuff” with a high tolerance (like very good quality drawer systems, and latches) these worked brilliantly, saving lots of space and giving lots of operational work for a relatively small layout. Recommendation. That these modules are describe in the standards as an exemplar.
3.     “Organic feel”. Freemo-N supported a very “organic feel” layout that really allowed us to capture the location with minimal modification. I would use this approach again. Recommendation. That “organic” modules are encouraged.
4.       Tables. The use of portable tables work really well, enabled a quick setup and a useful surface to put things on (instead of the layout). We used 90mm blocks, a bit higher would have been good, but many members of the public appreciated the lower layout height. Recommendation. This method is recognised as a viable alternative to the freestanding module concept.
Improves
1.     Control Panel. While the use of the DCC system worked well, a control panal for the main yeard would have enhanced the experience. Recommendation. Control panels remain a core part of the standard.
2.     Use of Plywood. We largely used plywood in construction, but used some dimensional lumber in the “fiddle” yards. There is a possibility that this held to contribute to some issues (however too fine a tolerance was the main culprit). We used a 12mm and a 6mm pieced of plywood for end plates (as being in the country we had limited access to choices). This method worked well and 18mm is about “right”. Recommendation. Continue to encourage the use of plywood for construction.
3.     Skyboard. For exhibitions I agree a skyboard would have enhanced the  mode. Doing that with the free-flowing shape of Nowa Nowa will be a challenge though. While Freemo-N is targeted at enthusiasts operating, not an exhibition layout for shows, I think it is important to promote the concept. Recommendation. Consideration to a optional skyboard, in particular “height”, in the standards.
Conclusion
The builders (Phil, Ashley, Darren and myself) are very happy with how things came together. The operators over the weekend, Martin, Barry, Phil, my 5 year old son Ryan, and myself) had a lot of fun (Barry and Martin, remember NO 5 finger shunting!), and the public received the model very well.
We are now planning several further modules... looks like the entire East Gippsland line from Sale and Maffra to Orbost is a possibility....
The following photos courtesy of David Bromage, thanks David! 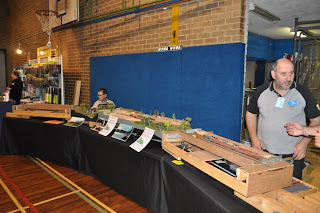 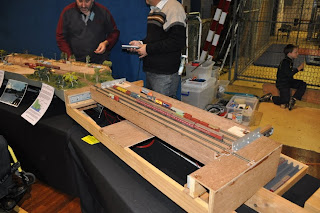 A closer shot of the transfer fiddle yard. Good quality kitchen drawer slides and accurate alignment and building were pre-requistites for these succesful modules. 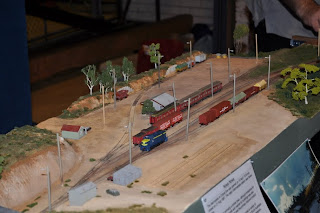 A week of extra work (not otherwise reported on the blog to date) has the layout at around 90% completion, more details and two water tanks to go!

More pictures of the show and Nowa Nowa are here:
https://picasaweb.google.com/david.bromage/HobsonsBayModelRailwayExhibition2011#