In between several other projects Johna and I have being building some KT wagons. This was Johns first go at scratch building and he has done an excellent job!

The wagons were then modified for "scantling timber" (sawn timber) with the two centre partitions removed and the stanchions re-arranged, however they kept the KT classification. In 1972-73 22 wagons were used to make the IS class where the wagons were lengthened by about 2 feet. See photos at Mark Bau's excellent site:
http://www.victorianrailways.net/freight/freight%20pages/kt/kt.html

I drew the wagon up in Corel Draw with the intention of etching it at some stage. I decided to "test" the drawing by making out of 10 thou styrene. That became the original. Here it is almost finished.

I found a few things to improve, in particular how the stanchions are attached, which I dutifully changed on the drawing. These also needed to be tested and as we both had a free night John came around for some modelling. We set to work on the second version, and this became John's first scratch built wagon.

Today I painted them both and weathered mine a bit. A timber load was made up from scrap styrene and painted. 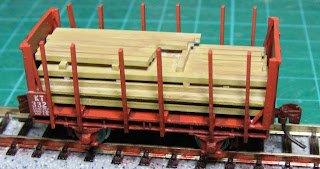 I've found a few things to change again before I do the etched version. I plan to make the drawing and a blow by blow scratch build of these in a future blog/article.

So now the layout has the first of a series of different timber wagons it needs... only about four more versions to go!